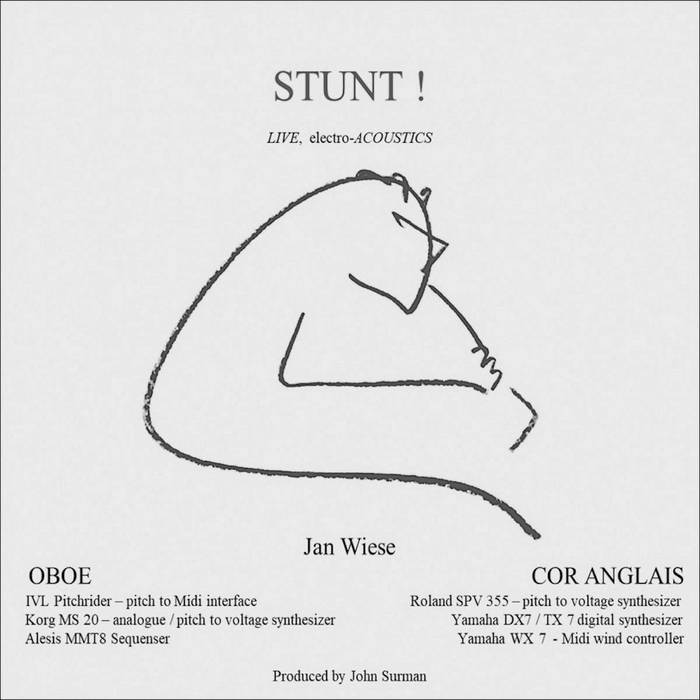 STUNT ! is a re-release of a CD from 1990. The adjourning booklet says: “This CD is a presentation of my work with live electronics that I started during the winter of 1986. My idea was to set up a combination of analogue and digital instruments that could be triggered and played from the oboe, preferably in such a way that it would allow performances of improvised music. The electronic instruments would function like one instrument; like an extension of the oboe. Spontaneity and the element of risk have been basic concerns when I perform my music. Stunt ! is therefore recorded like a primitive film, shot with one single camera - without changing camera angle or having the option of cutting the takes…”
In addition to the recordings of live electronics, Jan did two remarkable compositions for solo oboe and English horn, “Stilleben” and “Maskemannen”. The latter on special request from John Surman.
The recording took place over two days in the unique Rainbow studio of Jan Erik Kongshaug, who also mastered the material together with John Surman as a producer.

A video containing the audio and a score for the first track - Parablues - for two wind instruments, is included in the download of this album (for all you blues-oriented oboists out there). Bassoonists may appreciate that Jan recorded the bassoon part on the oboe into Ableton Live. The audio clip (sample) was then transposed down two octaves to the right pitch for a bass line.

Jan Wiese is a pioneer of electroacoustic improvisation. He has worked in a mix of contemporary jazz - live electronics and oboe, ambient, noise, electronica and contemporary art. From 1980 and onwards he performed in USA and Europe, with the Wiese-Wøllo-Waring trio and as a soloist with live electronics. -Jan is an extraordinary musician with an international reach who makes music that crosses boundaries with skill, inventiveness and imagination like few others.

Credits to John Surman, Erik Avnskog and late Jan Erik Kongshaug for the recording
Credits to the futuristic engineers at Yamaha, Roland, Korg and Alesis in the 80s, and most of all to the crew at IVL who created the Pitchrider as early as -86!